Dedicated to those who serve in the war on terror

Check Out Our Tenth Anniversay Video

Veterans Memorial Gold Star Healing & Peace Garden is a living tribute to all veterans, a memorial arboretum particularly dedicated to our intrepid sons and daughters now fighting the war on terror. Gold Star Garden names the Pennsylvania Fallen in the WOT. 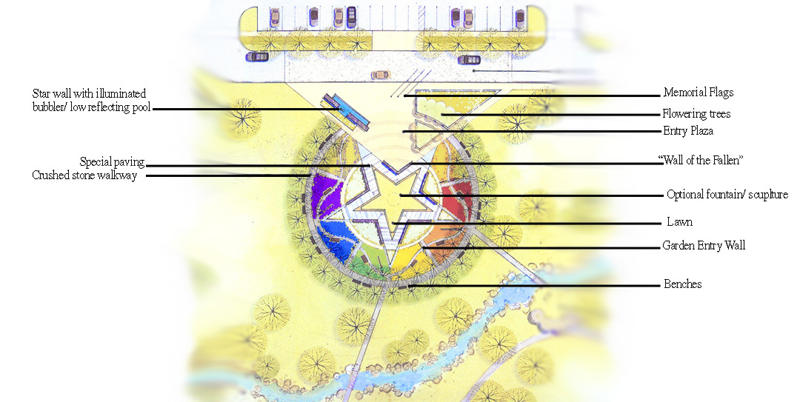 The Gold Star Garden started with the dream of  Cher Kondor, an American Gold Star Mother who lost her son, SPC Martin W. Kondor, in 2004. (“Gold Star” is a term derived from American Gold Star Mothers Inc., who were formed in 1928 as a family response to the many lives taken during the first World War. Now, Gold Star is applied to family members who have lost a loved one serving in the U.S. military.) Eight years later, with the help of board members, the City of York, and the Gold Star families of Pennsylvania, her dream of creating a memorial for all veterans came true.

The dedication ceremony (VIDEO BELOW) was held on June 9, 2012. Veterans Memorial Gold Star Healing and Peace Garden rapidly unfolded into a beautiful living monument to all who have served our country in the US Military. You will find here all the names of the Pennsylvania fallen in the war on terror. In addition all the York County fallen from the time of the founding of the American Gold Star Mothers are also inscribed on the black Pennsylvania granite Wall of Honor.

This living monument is a gathering place for those who want to commemorate,  remember the fallen and celebrate the lives of our intrepid sons and daughters who volunteered to protect this country.

The Gold Star Garden is free and open to the public from dusk to dawn all year long. It is young but daily growing. Gold Star Garden is at it’s peak on Memorial Day when the York Gold Star 5K and Run the Memorials takes place in Memorial Park. The garden changes every season and continues to mature with each passing year.