Good afternoon Gold Star Families, Major General Pittard, Major General Sischo, Mayor Bracey, Legislators, dignitaries, advisors, ladies and gentlemen. It is right and fitting that we gather here in Veterans Memorial Park to honor all those who serve this great nation in a time of challenge, and remember our fallen patriots who paid the ultimate sacrifice in the Global War on Terror.

There are many people to thank, who worked tirelessly — for many years, to bring the Gold Star Garden into fruition. I am deeply grateful to the board of directors who decided it was necessary to say Thank You to our troops and was determined to find a Way to make the Gold Star Garden possible. I would like to recognize Scott Rykiel from Mahan Rykiel Architects for his vision in taking the initial design  concept to what you see today.

Today I would like to explain why the Gold Star Garden was created, and to tell you about some of the features of the garden. I invite you to consider these elements as you explore the spaces following the dedication.

Barbara Benard just explained what is an American Gold Star Mother. I become one, when my son, Specialist Martin W. Kondor was killed by an IED in Iraq in 2004.

Martin was born here in York, County. He grew strong running through the Hellam Hills, wrestling for Eastern High School, and working at the Galleria Mall.

In September of 2011, Martin had just entered his senior year of high school. That afternoon He and his younger brother and I sat down at the dining room table to talk about the stunning events of the day.  Martin said, “We have been attacked on our sovereign soil and I am going to join the Army to do something about it.” He asked me to sign the induction papers, but I told him to take some time and figure out what was really going on.

So he went to New York, a couple times, and each time returned more determined that the U.S. Army was the right path for him. On November 5, his birthday, Martin turned 18 and slapped down some papers on that same dining room table. This time he said he had joined the Army and was going to be a Tanker. That was the safest position, in his opinion.

The whole family got behind him. He trained in Fort Knox and was stationed in Vilseck, Germany for more training. It was there that when a commander asked, “Who will join this Personal Security Detachment?” Martin said he would go. 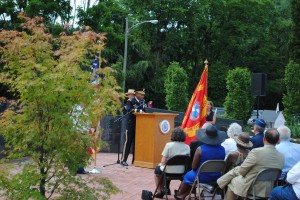 MG Pittard, Commander of Fort Bliss, Texas, and the keynote speaker at the dedication.

The Colonel that Martin was guarding is here today and you will see first hand the extra ordinary caliber of individuals who stand for this country. The overall mission was a success and the colonel is now a Major General commanding Fort Bliss and the First Infantry.

When his personal effects came back from the war, among them were notebooks in which Martin was writing the core values in many ways. I could tell he was trying to understand what they meant, internalize them, and how to best represent them on their diplomatic efforts.

So I tried to carry on this work of representing the best, by finding a way to interpret the core values in a way that anyone of any time or culture could understand. The virtues became colors, living colors and the idea of a garden was born.

Gold Star Garden is designed in a circle to express unity. It is located in a public place where all may have access at no charge.  And the Core Value Rooms express the best virtues in all persons of quality room by room.  Gold Star Garden is not a passive place to view static images. It is a call to action, bidding the visitor to focus on the best in all of us. I recommend you first enter the Walk of the Intrepid, moving clock wise. Visitors will enter the Red Courage Room. Here consider what it means to act with courage, remember those who are courageous, ask when have you been courageous, what has or has not stood in your way, and so forth.

Then on to the Orange Duty and Service Room and consider your own personal commitments. How do they compare with those serving, in the armed forces, who risk life and limb, knowing that there will be consequences for the jobs they have taken on. Physical, Mental and Emotional. Remember that our nation is now 12 years into Afghanistan and have been successful in removing many top leaders of the hydra.

Yellow represents Integrity and Remembrance. The Gold Star Garden is the place where we remember all those who volunteer to stand between our neighborhoods and those who  would do us harm.  In the Green Healing room, the Walk of the Intrepid, spirals around presenting the opportunity to slow down your pace, turn inward and connect with your loved ones.

Blue Fidelity Room offers a journal on the left side of the bench. It is inside a small box and is there for anyone to make comments on your thoughts and experiences in the garden.  To remember your loved ones, or any thoughts that come to mind.

Purple Valor room completes the ring of Core Values, but we don’t want to travel in circles all the time, so a Star Walk connect the rooms to the Center where White is an Expression of Honor.  And in the very heart, a fountain for renewal and refreshment.

On the  arms of the Star Walk, find, engraved in Pennsylvania Granite, the names of the Pennsylvania fallen in the War on terror. They are listed by Year. You will find dates from some of the early attacks, which we as a nation never answered, but continued up to 2011.

In addition, the wall behind me names the York County fallen from the time of the founding of the American Gold Star Mothers, or World War I.

Now when we loose a loved one, it is like a piece of our heart being ripped out. Into this cavity can enter either Light or Dark.  Gold Star Garden represents the Light. And like the frequencies of light arrayed in a prism, displays the component colors. So let this place remind us of who we are, our principles and our values.

GK Chesterton said, “The true soldier does not fight because he hates what is in front of him, but because he loves what is behind him.” This place in this time is a tangible way to say, ”Thank you. We love you too, where ever your are, when ever you act on behalf of  America” For in the days ahead we still need to stand united, in order to maintain our strength and our core values.

Ultimate Sacrifice is a phrase we hear often. Ultimate- no greater, no higher and Sacrifice – to bring closer to God.  Let us remember those who continue to serve, and those who are battle weary, those who are wounded and whose bodies may never be made whole. Let us remember as we drop our emotional burdens, travel to the center, and consider the best of our loved ones along the way.

This is the healing the garden can facilitate. Healing – Rooted in the phrase, to make whole. Use the Gold Star Garden to make your heart whole again. Then take that back to the family, the community and on out into the world.

I would like to close with a Pueblo Blessing:

Hold on to what is good

Even if it is a handful of earth

Hold onto what you believe

Even if it is a tree that stands by itself

Hold on to what you must do

Even if it is a long way from here

Hold on to Life

Even if it is easier to let go.

Hold on to my hand

Even if I have gone away from you.