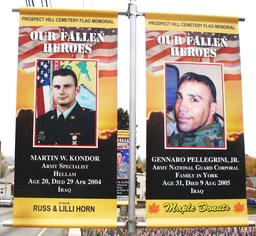 Cherriney Kondor never thought that a simple garden could do so much.

Yet after her son’s death in 2004, she decided the perfect way for not only her, but other mourning citizens, to express their feelings was through just that: A garden that represented several of the military’s core values like integrity, valor, duty, service and courage. These were the ideals Cherriney’s son wrote about, and they became the inspiration for the Gold Star Peace Garden in York, Pennsylvania.

Cherriney’s son, Martin, was in high school in the fall of 2001 when the World Trade Center towers in New York City were attacked. When Martin came home on the evening of September 11 after school at Eastern York High School, he said, “We have been attacked on our sovereign soil, and I’m going to do something about it.”

Kondor was skeptical about his decision, and it took trips to ground zero in New York City to convince them both that it was the right decision.

On November 5 of the same year, Martin decided to enlist and despite her conflicting hesitation, fear and pride, Cherriney supported his decision. After training, he served in Baqubah in the Diyala province in Eastern Iraq. The soldiers he fought with called themselves the “Dukes of Diyala.”

On April 24, 2004, Martin Wilson Kondor was killed by an improvised explosive device. Upon hearing the news, Kondor put her business on hold and escaped from the stress by sitting on her porch, looking at her garden and listening to the birds sing. Eventually Martin’s friends and fellow soldiers started visiting and sharing stories with Kondor – and the wheels began to turn.

“One of the neat things that happens when you lose a son or daughter in war is that you sort of gain the rest of the military,” Kondor said.

Then Kondor received a letter from Ann Wolcott, a nearby York neighbor and president of Gold Star Mothers. Wolcott described the group’s advocacy for mothers of children who have died while serving in the military.

“I just decided this was probably a good place to talk to women who had similar experiences to mine,” Kondor said. “It represents not only the mothers, but the brothers and fathers and cousins and aunts and everyone who has lost someone in military service.”

When it came to developing the Gold Star Peace Garden, it all started with her son’s personal notebooks that were sent to Kondor after Martin’s death. When she read the core values contained in the passages, she wanted to take these things that were important to him and represent them in a universally understandable way.

“I asked myself how I could best represent these core values.” Kondor said. ‘How can I honor his service?”

Her garden helped her mourn her son and she thought that a similar concept could work for a wider audience – the plants would be a kind of living memorial.

“This garden is an active place, to honor all veterans and remember the fallen,” Kondor said. “The root of the word healing means to become whole. This garden is just a little tool, a vehicle, to do that.”

The garden plan is divided up into sections – each with its own color scheme and theme.  Each sector then leads to the Center Plaza of Honor where a bubbling fountain encourages cleansing and joy. There will also be a Wall of Valor upon which soldiers’ names will be inscribed.

A similar group in Brazil is interested in creating a sister garden to the one in York. The Gold Star Garden in York is slated to open in the summer of 2012.

“I think it will help more people heal,” said Kondor.

Abigail Geiger is a journalism student at the University of Missouri-Columbia and resident, during breaks, of Arlington, Virginia. Her grandfather served in the Navy as a pilot and an engineer, and her extended family is still involved with and working within that military branch.