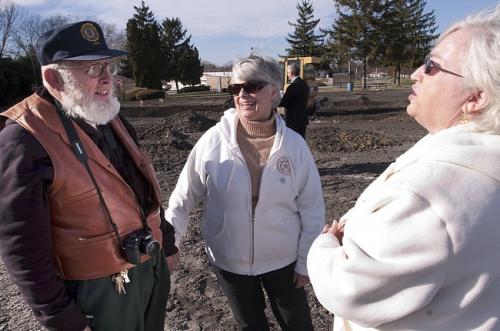 Crews have begun tearing out a parking lot to make way for arboretum, meant to memorialize Pennsylvania’s war casualties — particularly those who died in the wars in Afghanistan and Iraq.

The $750,000 garden, which will include fountains and a multi-colored floral display, was the brainchild of Cherriney Kondor. Kondor’s son, Army Spc. Martin Kondor, died on April 29, 2004, in Iraq.

Local contractor Kinsley Construction and Glen rock plumbing company James Craft & sons are among the contractors working on the project.

Since her son died, Kondor has been working to build the garden. The city, Kondor said, waived construction fees.

“This is fantastic,” Kondor said. “I love it. I’ve been working on this for eight years now, and sometimes you thought well, how can this really work? This is a very giving community full of wonderful people with vision.”

What is it? The garden will be circular, and about 140 feet in diameter — roughly the size of Continental Square in York.

At its heart will be a large star design surrounded by outdoor ‘rooms’ or meditative spaces. Each room will contain plants and flowers themed in one of seven colors representing “character traits found at the heart of all service personnel,” according to the garden brochure.

The names of those who died in combat will be engraved on a Vietnam Memorial type wall.

When will it be finished? It’s slated for completion on June 9.

How you can help: About $300,000 is still needed to complete the project. Fundraising information is available at goldstargarden.com. Donations may also be mailed to Gold Star Garden, P.O. Box 3339, York PA 17402.